BAYAN-USA, an alliance of 14 Filipino American organizations and chapter of Bagong Alyansang Makabayan (Bayan Philippines), is calling on President Gloria Macapagal Arroyo, the Department of National Defense, and the Armed Forces of the Philippines to immediately surface Melissa Roxas, an American citizen of Filipino descent who was abducted in the Philippines on May 19. BAYAN-USA also urgently calls on our representatives in the U.S. Congress to act quickly to ensure the safe return of Roxas.

Roxas is a well-known Filipino American activist, who served as the first Regional Coordinator of BAYAN-USA in Los Angeles and co-founded the cultural organization Habi Arts. Roxas is an active human rights advocate and was instrumental in organizing a BAYAN-USA contingent that participated in the International Solidarity Mission in 2005, an international fact finding mission that called attention to the escalating human rights violations in the Philippines. Roxas went to the Philippines in 2007 to pursue human rights work, where she became a full time volunteer health worker. She was abducted on May 19, 2009 at approximately 1:30 PM in Sitio Bagong Sikat, Barangay kapanikian, La Paz, Tarlac. She was with two other volunteers, Juanito Carabeo and John Edward Handoc.

Based on reports filed by the human rights group KARAPATAN and the La Paz police, Roxas and her companions were taken by at least 8 armed, hooded men riding two motorcycles and a Besta van without any license plate numbers. There has been no word on the whereabouts and condition of Roxas and her companions since the abduction. The circumstances of Roxas’ abduction typify the abductions and enforced disappearances of over 200 innocent civilians, allegedly last seen in the hands of suspected state security forces.

“We are deeply concerned about the abduction of Melissa Roxas, Juanito Carabeo and John Edward Handoc. We call for Melissa and her companions to be immediately surfaced unharmed,” said BAYAN-USA Secretary General Rhonda Ramiro. “We condemn the ongoing abductions and human rights violations that have been rampant under the Arroyo administration and victimized thousands of innocent people.”

The search for Roxas and her companions will be spearheaded by the human rights organization KARAPATAN, while BAYAN-USA, its member organizations, and allies will undertake an international campaign to exert pressure on the Arroyo government to surface Roxas. “We appeal to our elected officials, members of the Filipino American community, and all people in the U.S. who believe in human rights to take action to surface Melissa and her companions. Since we were founded in 2005, BAYAN-USA has campaigned ceaselessly for an end to the human rights violations in the Philippines, and we will not stop until we obtain justice for Melissa and all victims of human rights violations under Arroyo.” 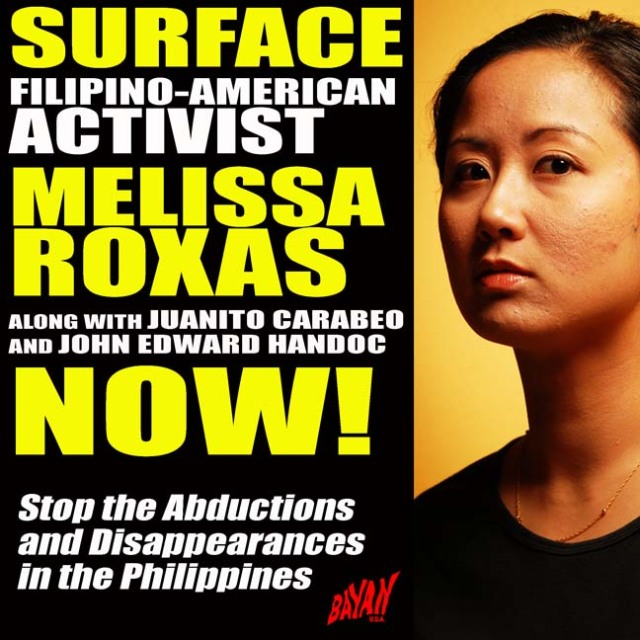